These include Hinksey Heights fen 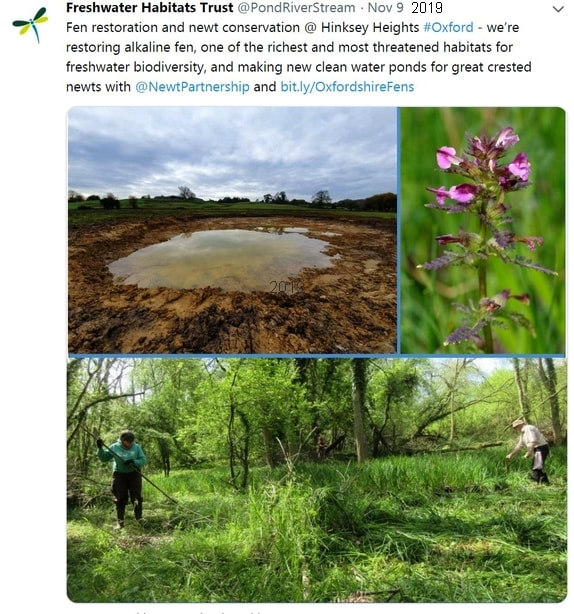 ​
During meetings with the Freshwater Habitats Trust (FHT)  in 2017, Judy spoke about the restoration of alkaline fens in Oxfordshire (Lye Valley, Chilswell, Frilford Heath Ponds and Fen SSSI, and Cothill SAC) and pointed out that there were other SSSI fens in the county, privately owned, that also needed restoration.  She drew attention to Hinksey Heights fen (Harcourt Hill Scrub Local Wildlife Site - owned by HInksey Heights Golf Club), which, she explained, was classified by the Thames Valley Environmental Records Centre (TVERC) as ‘scrub and wet woodland’, although the designation should have included ‘reed bed’, as the site was actually an overgrown alkaline valley-head spring fen.

As a result of the meetings, the FHT agreed to host the project and Natural England agreed to give it their support, particularly with regard to obtaining grants for the work.

A small grant for HInksey Heights fen was obtained from the Trust for Oxfordshire’s Environment to cover 18 months of tree felling, scrub removal and reed cutting carried out by volunteers under the guidance of a paid contractor. Restoration work began there in July 2018 with the aim of restoring it to short fen vegetation.  Volunteers work there on the second Sunday of every month.

Four other privately-owned SSSI fens are included in the project, all currently partly classified as in ‘Unfavourable’ condition; at the request of the owners, their location has not been divulged.  Work on these four SSSIs is being funded by an EU Water Environment Grant secured by the Freshwater Habitats Trust.
​On Sunday, 2 June 2019 Judy led a walk at Cothill Fen / Ruskin Reserve NNR
in celebration of the anniversary of the purchase of the Ruskin Reserve for the Society, negotiated by G.C. Druce and Professor Poulton in 1902 (ownership was transferred to the National Trust in 1916). Judy has been writing a history of the site.

​Photos taken by Christopher Hoskin of ANHSO are available here​​.  More photos of orchids in the fen taken by Judy are here.

It was also an opportunity for people to see how the hard work of Natural England and Abingdon Green Gym volunteers has improved the condition of this site. Reed and trees have been pushed back to restore the valuable flowery short fen, benefiting plants such as Narrow-leaved Marsh Orchid, Common Spotted Orchid, Marsh Valerian and Cotton Grass. Small Red Damselfly is the rather special feature of this reserve.  In addition to the wet fen, the walk encompassed the dry Hurst Copse ancient woodland behind the fen.

The Berkshire, Buckinghamshire and Oxfordshire Wildlife Trust (BBOWT) has produced an excellent guide to walks in this fen area 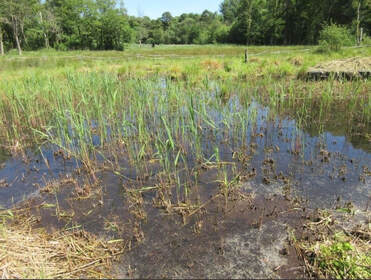 2 February 2018
Judy and other volunteers from a new conservation group led by Leo Jennings of Natural England cut back trees and scrub at Cothill Fen SSSI near Abingdon as part of maintenance to stop tall plants taking over the wetland habitat. See  article in The Oxford Mail, 3 Feb 2018.

Although this was the first time Judy had worked under the aegis of this group, she has been involved with work at Cothill Fen for several years