Palynology:
Skilled in the identification of pollen grains and fungal spores in peat and in lake deposits, and in environmental forensic trace evidence, Judy wrote the identification section of what is still the standard text on pollen identification, Pollen Analysis, Moore, Webb & Collinson, pub. by Wiley-Blackwell, latest edition 18 Aug 1994. 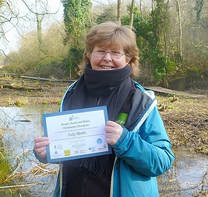 Judy was awarded a 'Freshwater Champion' certificate by the Freshwater Habitats Trust in recognition of 'the time, effort and dedication' she has given to the Trust's People, Ponds and Water project.  She also received £25's worth of book tokens.  A close-up of the certificate can be seen with other photos taken in the Lye Valley on 7 March here.

Any captions added to photos can be seen in full by clicking on the white circle with an 'i' in it at top right of photo, after clicking on a photo to get to slideshow view. 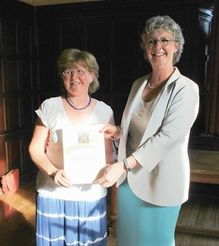 The photo (one of the official ones taken of the event) shows Judy receiving her certificate from Lady Helen Baker, a Deputy Lieutenant for Oxfordshire.
Judy was one of the contributors to The Flies Workshop, a Radio 4 programme about work done by members of the Dipterists' Forum (one in the series 'Bitten by the Bug') broadcast on 11 October 2011.   The programme is still available on the BBC iPlayer - click here. The first interview with Judy starts about half way through the programme, at the 07:20 mark and the second at 11:28.