Wasp spider, Argiope bruennichi, found in its web complete with stabilimentum* in the Lye Valley on 11 August 2021. These spiders are becoming increasingly common in southern England and are slowly spreading north.

*A web decoration or stabilimentum is a conspicuous silk structure included in the webs of some species of orb-web spider. For full explanation see Wikipedia entry

Photo by Judy Webb - to see it full size, click here,  then click on photo that appears.
​

​Judy tweeted a video of the drain from the Town Furze estate disgorging a torrent of road run-off into the Lye Brook after only a 5-minute storm the previous week.

She explained: 'Ever more intense rainstorms are with us now as a result of #ClimateCrisis. Lye Valley #SSSI fens have been eroded by road run-off piped to Lye Brook from a really large area of Headington. Mitigation holding ponds & lots of leaky log dams* have done a lot to #slowtheflow, reduce fen bank erosion & flooding in Cowley Marsh, Florence Park, from Boundary Brook. But what if we get 13cm rain in one day, like the Isle of Wight last Monday?
​
* Scroll down this page to item on these dams, 30 April 2021, and further down to item on the holding ponds, 20 October 2021.

The valley was carpeted with parsley water-dropwort, Oenanthe lachenalii.
'Oenanthe' is derived from the Greek oinos "wine" and anthos "flower", from the wine-like scent of the flowers '(Wikipedia)

Judy tweeted: 'All this rare calc. fen returned from tall dense reed by cutting/raking mainly by the Friends of Lye Valley scything team'

Full version of Tony's photo (left) and others tweeted by Judy Webb, as well as one showing the fen in July 2013, before the reed was brought under control, are available here.   (There's also one of Tony with a large Austrian scythe.)

​21 July 2021
A team from Oxford University's Museum of Natural History visited the Lye Valley to film and interview Judy about insects and the rare habitat of the fen. The film will be on display as part of their HOPE* project
*Heritage, Outreach and Preservation of Entomology

​Judy is a Committee Member of the Dipterists Forum
Photos taken by Tony Gillie - full size.


Students from Stanford University, California, were given a guided tour of the Lye Valley by Heather Armitage, Secretary of Friends of Lye Valley (seen on far right of photo).

A pink climbing rose in the Lye Valley might be the one seen in a photo by Henry Taunt taken around 1914.  See snips of Judy's tweet, and her photos here

If you think you know what species it is, please reply to Judy's tweet.

Tony Gillie  tweeted  from the Lye Valley 'An almost palpable sense of delight when our ecologist [Judy Webb] managed to get out the entire root system of a reedmace (Typha) plant from one of our small ponds where it arrived uninvited'.

Judy replied 'Small ponds can easily be completely taken over and shaded by reed and Typha latifolia (reedmace, bulrush) eliminating open water.  Both have wildlife value, but in this case a proportion (or all for Typha) need removal/reduction each year or we will lose the sunny open water parts'.

For Tony' s tweet and the full version of his photo, click here    Also see his tweet on 23 June showing dragonflies and damselflies immediately taking advantage of cleared areas for ovipositing (laying eggs).

2 June 2021   Flea sedge,  Carex pulicaris,  seedlings, grown from seed collected in the south fen of Lye Valley SSSI were planted in the north fen area. Judy's comment on Tony Gillie's photo was 'Looks just like a pot of grass, but it definitely is not. Tiny and special flea sedge, with seeds that hang on the stalk and when ripe jump off like fleas when touched!'

27 May 2021 Tony Gillie @GillieTony tweeted this beautiful photo,  'Robin (Erithacus rubecula) with Cranefly breakfast this morning in the Lye Valley'.

To which Judy Webb replied 'and I note that he/she or the nestlings are about to enjoy a giant cranefly, Tipula maxima!'

Click on the photo to see it full size
​ 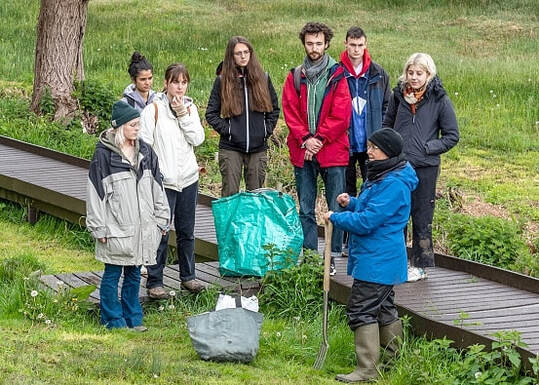 ​15 May 2021
Judy ran a special conservation session in the Lye Valley for the Oxford University Nature Conservation Society (OUNCS), run by Jamie Walker.  The students helped with work on the fen. They dug out lots of creeping thistle and pendulous sedge and their efforts were much appreciated.  They are seen here listening to Judy talking about the history and flora, as well as the threats to this rare, tufa-forming, alkaline spring fen. Jamie (in red jacket in photo, left)  tweeted: 'Fingers caked in peat, knees damp with spring-water, alongside frogs, flowers and moss is the best way to learn'

Photo by Tony Gillie - who commented 'And the rain really came down. Thankfully, everyone just shrugged and carried on working'  Click here for more of Tony's photos, full size

​Judy Webb retweeted  @friendlyevalley:
​
9 May 2021
​
'We want to rewet the fen near the start of the boardwalk, visitors want to keep their feet dry. So, we've built a short raised footpath with pipes underneath, taking our valuable spring water from one side of the path to the other. Let's just hope our visitors use it !' 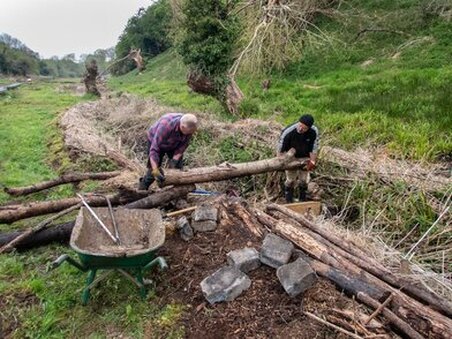 30 April 2021
​
'Our work to rewet the fen continues, with the construction of another leaky dam at the head of the Valley. By raising the water level and holding more water for longer, we reduce the risk of flooding downstream, and the loss of #peat through drying'

Map showing location of the Lye Valley  In the North Fen (adjacent to The Churchill Hospital) brown shading within the green-lined area indicates inclusion in Natural England's Lowland Fens Priority Habitat Inventory for England.  The indication of the SSSI South Fen (adjacent to the golf course) becomes visible when you zoom in.​
18 October 2020  Judy Webb's explanation of work on the Lye Valley interception ponds and structures in the Lye Brook
​Lye Valley officially designated a Local Geology Site by the Oxfordshire Geology Trust - Oxford Mail,  13 July 2017
​
​Alkaline Fens & the Importance of the Lye Valley SSSI Fens within Oxfordshire and Nationally/Internationally, Judy Webb 2014

13 July 2017:   Oxford Mail article -  Lye Valley recognised as Local Geology Site by Oxfordshire Geology Trust based on its 'extraordinary hydrological and geomorphological features which interact with the biodiversity in the valley'.

Article in The Oxford Mail, 25 November 2016
A new masterplan  - The Vision for the Lye Valley - "aims to join up conservation efforts on the parts of the nature reserve under different ownership".   For more information see the separate Friends of Lye Valley website ​

15 September 2015: Judy appeared on Oxford local TV, Channel 8, recording species in the west side of the Lye Valley transect.

An Oxford Mail article on protecting pond life, 5 February 2014, included comments by Judy, Chairman of Friends of Lye Valley, on help to protect the Lye Valley given by The Freshwater Habitats Trust.

A programme in the BBC 1 series Urban Jungle broadcast on 1 August 2013 (but filmed earlier in the year) included footage taken in the Lye Valley North Fen and Town Furze allotments, with Judy talking to Chris Packham about wildlife.

DEFRA, Biodiversity News, Issue 47, Autumn 2009, page 27: 'Caring for a green lung at the heart of Oxford' refers to Judy's work in the Lye Valley.   A link to this former newsletter published by DEFRA is no longer available. It has been replaced by Nature News