Lye Valley - some past events

1 September 2019: Judy led a tour of this 8,000-year-old, internationally rare, alkaline spring fen, which supports 20 species of rare plant and  27 scarce invertebrates, as well as thriving populations of reptiles and amphibians.  The walk proved very popular.  A very large number of people turned up, packing the boardwalk. One of them, an Affiliate Tutor at the School of Education, Oxford Brookes University, subsequently tweeted: 'I visit this place at least twice a week, and have more understanding of it after two hours with a knowledgeable guide than my own visits have given me'. 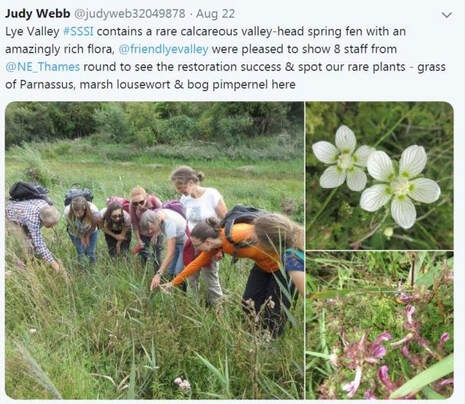 
Staff from Natural England Thames were accompanied by some Friends of Lye Valley on one of their two recent tours of inspection of the progress of improvements to the state of the fen.

​They were very favourably impressed

6 November 2018:  Oxford Golf Club and Friends of Lye Valley have brought back to the golf course a rare plant found there in 1839 in an area next to Hollow Way. They were joined in a special planting ceremony by members of the Oxfordshire Flora Group and the Freshwater Habitats Trust.  Flat Sedge Blysmus compressus, is a grass-like plant which thrives in wet marshy conditions. For full details see Golf Business News website, 16 November 2018. ​

​3 November 2018: Andy Gunn and BBOWT Wild Oxford volunteers cut and cleared both sides of the boardwalk near the Slade entrance, hand-pulled an infestation of Woody Nightshade, cut down dead and dying trees, and more.   Andy put some of Tony Gillie's excellent photos on Twitter

11 Oct 2018: Professor Adrian Parker and students from Oxford Brookes University visited the Lye Valley to carry out a palaeo-ecological investigation. The results will provide a wealth of information, including the age of the fen - all photos by Tony Gillie.
For further information see captions to the photos  (To show / hide captions, click on the 'i' in the white circle at the top right of the photo when viewing photos in slideshow.)

​24 July 2018: A group from Oxford City Council's IT and HR departments and OCC Business Development Group joined Oxford City Council volunteers (led by Carl Whitehead) in clearing a footpath in the Lye Valley.  Afterwards Judy led the group on a tour of the valley.  To see photos taken by Tony Gillie, click here

3 June 2018 Members of Oxford Civic Society enjoyed a walk in the ​Lye Valley led by Judy. For photos click here

13 May 2018:  As a local contribution to GeoWeek (5 to 13 May 2018), Owen Green of Oxfordshire Geology Trust (seen above describing fossils found at Rock Edge) and Judy Webb led a guided walk around Rock Edge and through the Lye Valley.  Over 30 people came along.  For photos click here   For OGT info leaflet (scanned), click here

25 June 2017   Lye Valley Open Day -  a Sunday, 11.00 am to 4.00 pm
Judy led two walks through the Lye Valley north fen explaining what work has been done there and the reasons for doing it.
Most of the photos of the morning walk were taken by Tony Gillie, a regular Lye Valley volunteer - click here.  Marilyn Cox took photos of the morning walk, afternoon walk and other activities throughout the day. Refreshments on sale in Bullingdon Community Centre, hosted by the Hogley Bogstars, were excellent and much appreciated. There is an article on the event by Stuart Rust in the online edition of The Oxford Times, 26 June, with photos by Ric Mellis showing some activities not covered in the other photos.  The photo below was taken at one of the Lye Valley ponds, once overgrown but now restored.

28 August 2015: Friends of Lye Valley welcomed Green Party Leader, Natalie Bennett, to the Lye Valley. Judy showed her some of the rare plants and insects which have survived there for over 8,000 years.

5 July 2015: Judy joined a working session of Oxford Conservation Volunteers in the Lye Valley  (Click on photo to move to next one/previous one - photos by Judy)

4 July 2015: a walk in the Lye Valley led by Judy 'In the footsteps of the Tudor Botanists'

28 June 2015: Judy with Friends of Lye Valley and Oxford Conservation Volunteers in the Lye Valley  - for photos click here

Photos taken when Judy visited the Lye Valley on 26 July 2013   (To reveal captions, click on double arrows at top right of window - but this will also allow advertising photos to be included in the slideshow.)