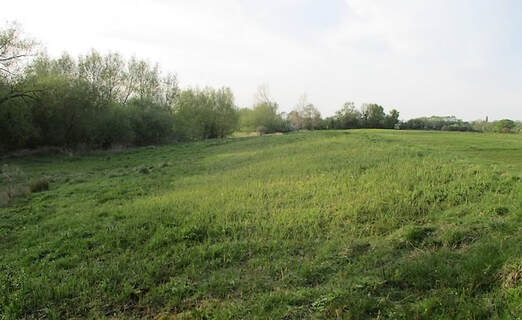 Mowing, scything and raking carried out by volunteers led by Rod D'Ayala on 15 March, in pouring rain, before the spring sward began vigorous growth, kept the vegetation growth in check.

Lesser pond sedge, Carex acutiformis, seen in the foreground, can grow up to 150 cm tall, so one of the aims of that scything and mowing was to reduce its vigour to give smaller plants, such as marsh valerian (photo below) and the rare flat sedge, Blysmus compressus, a ‘vulnerable’ Red Data Book species, which appears later, a better chance of flourishing.
​
More photos from 23 April 2020 here 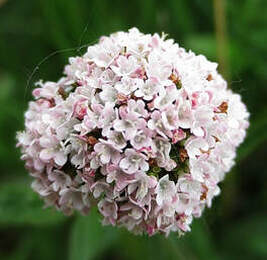 ​​This is a bank with a limy wet seepage zone - a sort of mini-fen on the slope down to the Cherwell.  We need to reduce rank vegetation for the benefit of the rare flowers there, particularly small flat sedge, Blysmus compressus. This inconspicuous plant is nationally red-listed and this site is now the only one in Oxfordshire where it can be found.  Also on the site are Marsh Valerian Valeriana dioica (flowers in spring - photo, left, taken by Judy Webb), and Devil's-bit Scabious  Succisa pratensis(flowers late summer - seen in photo below).

Management by volunteers (with permission from Oxford City Council, who own the land) became necessary because of a change in the grazing regime of the tenant farmer from light horse- grazing all year round to very infrequent sheep grazing, which is insufficient for the flora.  The bank cannot be mown for hay like the rest of the field, as it is a bit too steep and wet for machinery. Sheep are not that keen on grazing-down long rank vegetation, so neglect, and development of tall rank sward, would eventually have lost us these and other special flowers on this site.
​ 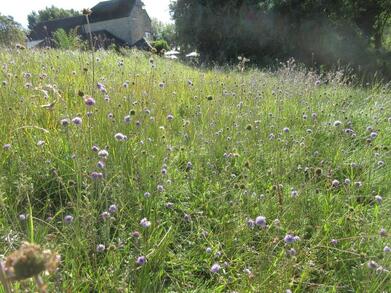 Information from Sally Gillard, one of the regular volunteers at the site:

'These are ancient meadows, with ridge and furrow showing arable on flat land above the wet bank until around 1640, after the Civil War. Then arable was abandoned, so they have been permanent pasture for the last 300 plus years and are diverse as a result.  On the Langdon map of around 1605 this field is called ‘Alesworth Furl Stache’, in its arable phase.  The Victoria Arms pub is owned by Oxford Preservation Trust who also own fields to the north of the Almonds Farm one. The pub at one time had all its beer delivered across the Cherwell on the Ferry boat (there was no road from Marston), hence the site is mentioned in old botanical texts as ‘Marston Ferry’. 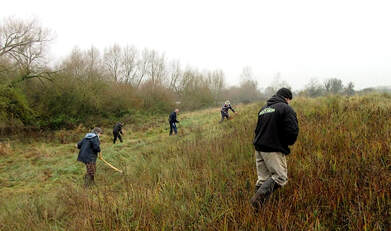 As Judy explains in her tweet, 'Grazing is now too intermittent to provide the short turf it loves, so we scythe and rake twice a year. Lots of other good plants there including marsh valerian in spring and, even now, last devil's bit scabious flowers. Found 3 harvest mouse nests as well and water vole evidence! 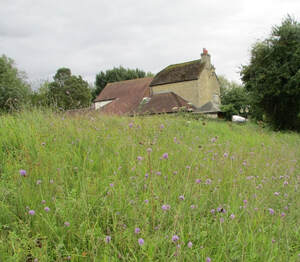 ​​
16 September 2018:
​Cutting and raking on Almond's Farm Local Wildlife Site wet bank, just north of the Victoria Arms pub, which is owned by Oxford Preservation Trust (seen in the photo).

​This year the scything/raking took place earlier than last year due to the dry, hot, summer.

​Devil's bit scabious, Succisa pratensis, which is very valuable for pollinators, as it flowers late in the year when other plants have gone to seed, is abundant on this bank - seen in photo on the right and below. 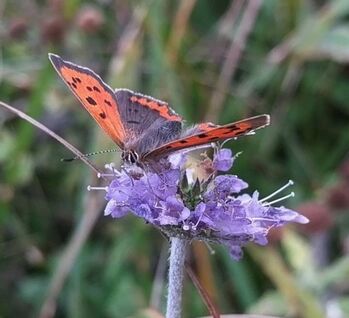 ​For more photos, click here
​In slideshow, click on 'i' in white circle for info.
Photos taken of Almond's Farm LWS wet bank on 7 September 2017
​ 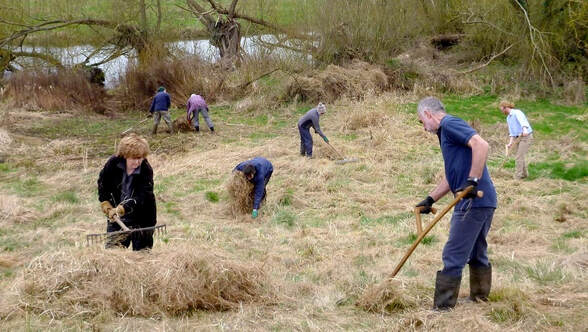 19 March 2017:
Clearing rank overgrowth on a bank with a number of rare and scarce plants on a spring line in Burnt Mill Meadow and Almond's Farm Local Wildlife Site. The bank is in Almond's Farm Meadow, property of Oxford City Council.

Due to tenant farmer changes the bank had not been grazed or cut for 6 years. Rare plants would have beeen lost, if no action had been taken.

The nationally red-listed Small Flat Sedge, Blysmus compressus is the rarest plant found here; this is its last site in Oxfordshire.  David Morris (one of the scythers) is its Flora Guardian within the Oxfordshire Flora Group - see his 23 March 2017 entry at  http://oxbot.blogspot.co.uk/  (for list of monthly entries scroll to bottom of that page)